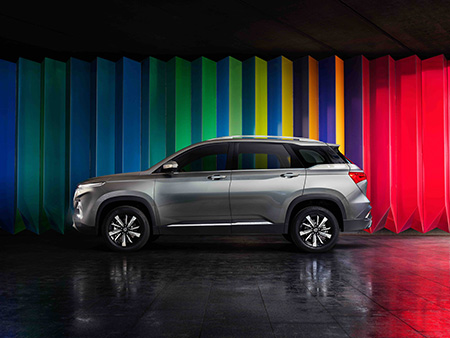 MG Motor recently unveiled its hybrid SUV Hector which has been dubbed as India’s first Internet enabled car. The 48V hybrid SUV comes with 19 exclusive features that make it the new benchmark in its segment.

“The MG Hector, as India’s first Internet car, has been built with a high level of localisation and comes power-packed with features, inside-out,” said, Rajeev Chaba, President and Managing Director, MG Motor India, With internet inside, the next-gen iSMART technology in the Hector promises to deliver safe, connected and fun experiences with the biggest HD touchscreen in its segment at 10.4 inches. The Hector will also be the first car with a sophisticated 48-volt mild-hybrid architecture in its segment. With this, MG Motor becomes the first mainstream car-maker in India to bring 48V technology to the mass market segment.

Equipped with MG’s signature design cues including the famous star-rider grille, the MG Hector heralds a new era for the much-revered octagonal badge in India. Its character lines are defined by geometric shapes, horizontal flow and symmetry. Various sections of Hector’s interiors are inspired by modern dance forms. Designed and developed for Indian customers, the Hector has been built to withstand extreme road conditions and has been tested for over one million kilometres in India before enter ing production at the company’s plant in Halol, Gujarat, earlier this month.

MG Motor India will begin shipments of the Hector SUV within the next few weeks to its widespread network of 120 outlets across 50 cities. The car-maker aims to expand its network to 250 outlets by the end of September this year.